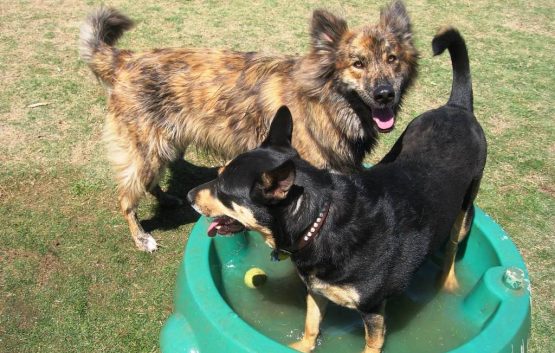 Some people make fun of it. My parents find it weird. A dear friend told me, in all earnestness, the practice was quite unhealthy.

“You spend way too much time at the dog park,” she said, urging me to go to a movie, a gallery, the highly touted Arizona-Sonora Desert Museum.

Lola Handzel regularly trots in with Chavo, Roxi and Jebediah. Walt, last name unknown, shows up with the chipper Chester. Joan Visconti and Shree are as constant as a sunset. And a day at the park would not be complete without Zane the Great Dane, with his people, Sally and Jerry Michaels.

“It’s more than just a place to hang out,” Visconti said. “It’s a community.”

While these regulars frequent the Sixth Avenue Dog Park, the five other dog parks around town have similar connections.

“It’s really something special,” Visconti said. “We live in cities and often even don’t know the name of the person who lives next to you. It’s nice to have a place where you can develop friendships.”

The friendships start at the park, sometimes tentatively with dog conversation, dog connections and friends breaking up fights that may start between other friends’ dogs.

They can blossom to chats over coffee, creative collaborations and more.

Catherine Goodrich and Tim Hubbell ended up getting married after first meeting at the Sixth Avenue Dog Park.

They could not be reached for comment, but their answering machine recording said: “Please leave a message. Our dogs are listening.”

“Dog people understand each other,” Handzel said. “They don’t wonder why I can only go out until a certain time on Friday because I have to let the dogs out, or why I can’t meet them until after I take the dogs to the park.”

“Right there you have a kindred spirit.”

The spirit shone brilliantly the past two weeks at the Sixth Avenue park when an orphaned, injured pit bull puppy limped his way into the hearts of parkgoers.

Parkgoers “adopted” the injured pup, now named Jebediah, with Handzel acting as foster mom. She took him for treatment of his shattered and infected leg.

So far the medical bills have come to about $400 and Jeb’s going to need a costly operation. Park regulars held a bake sale last weekend to raise funds.

“Every time someone gave money, I cried,” Handzel said. “It was so heartwarming.” One woman from the dog park, who was visiting with her huskies but wished to remain anonymous, handed over a check for $100.

“We rally,” Visconti said. “We watch out for each other’s dogs.”

We also don’t find it strange or unhealthy to spend “way too much time” at the dog park.

NOTE: This column was a winner of the Don Schellie Award for best feature column in the entire state of Arizona. Originally appeared in the Tucson Citizen before it closed.